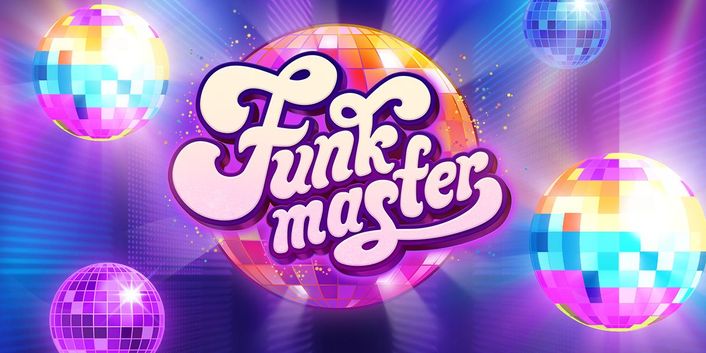 NetEnt’s Funk Master does have a throwback feel to it, but that’s fine. Many gamers appreciate the slot machines that are themed after different decades of the twentieth century. In this example, we’re receiving a disco theme with a range of elements and graphics that work nicely together, based on the 1970s.

Funk Master is a slot machine with 8×8 reels and a Cluster Pays feature. Wild symbols, multiplier wilds, scatters, and free spins with a wider gaming area are just a few of the fantastic features to check out (up to 8×12 reels). The slot machine’s RTP is 96.04 percent, and its players will be chasing a top prize of 3,337x the bet.

You’ll be able to spend a lot of money on each spin of Funk Master, starting at $0.20 and going up to $200 if your budget allows it.

Given the increased volatility of this slot machine, the rewards aren’t quite high enough. The most you can win while playing it is 3,337 times your stake. However, with an RTP of 96.04 percent, which is around typical, the RTP should be good. Make sure you double-check that figure because operators can choose to use a much lower RTP if they so like.

Funk Master is a Cluster Pays slot with 8×8 reels, which is a wider gaming area than we generally see in Cluster Pays slots, but not unheard of. You’ll need clusters of matching symbols that contact horizontally and/or vertically.

Following the formation of a cluster, an avalanche mechanism occurs, removing winning symbols and allowing new symbols to drop down in their place. This can result in more clusters and, as a result, more avalanches.

One of the feature icons in use is the Dancing Wild. It’s a replacement that, if placed adjacent to a group of symbols, can aid in the construction of any new cluster. It is not erased by the avalanche that follows, and it transfers to a new location, maybe assisting numerous times in the formation of clusters.

Forming wins in a specific Hotspot area, which is randomly assigned to 2×2 positions each spin, is another chance to acquire a Dancing Wild. The game adds a Dancing Wild if all four symbols from that Hotspot are employed in new clusters.

The Multiplier is another intriguing feature sign. It will simply appear on the reels and enhance wins by the amount indicated on it for the round. A single multiplier can have a maximum value of 10x. If multiple multiplier values are present at the same time, you add them up.

You’ll be looking at the free spins for the main feature. By getting 3+ scattered Dancing Wilds in a single game, you can earn 6 free spins. When opposed to the paid rounds, the free spins have a few differences.

For starters, you’ll obtain a Hotspot with 3×3 symbols, and if you can use all of its symbol locations in wins, you’ll gain 2 Dancing Wilds and an extra row at the top of the game area. If this happens numerous times, the slot can have up to 8×12 reels.

The second difference is that the 3+ Dancing Wilds that triggered this bonus will remain on the reels throughout the free spins.

The disco theme, as well as the influence from the 1970s, are evident. There isn’t much variety or a backstory behind its creation. Soundbars and simple lines can be seen in the backdrop. You’ll find a variety of different disco balls as symbols on the enormous 8×8 reels. Each one is available in a variety of colours, including blue, green, purple, yellow, pink, and orange.

Funk Master may not appear to be much, but it might be a fun option for those who prefer Cluster Pays games. Aside from the fairly dull theme and implementation, the game’s highest payouts aren’t particularly spectacular. Given the high volatility, I was hoping for a lot more.