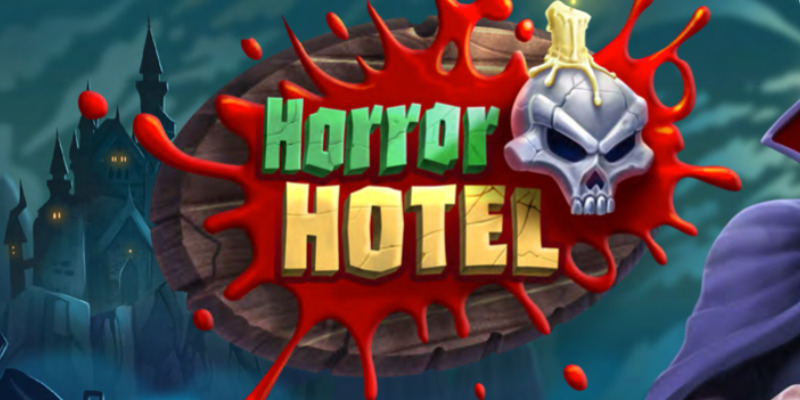 We wondered why some people are drawn to horror flicks and not others after playing Relax Gaming’s eerie online slot machine, Horror Hotel. Many diverse explanations, ranging from psychological to thrill elements, have been found through online research. Of course, there are different levels of fright, and the horror in Horror Hotel is roughly on par with the Hotel Transylvania movie series—that is, there isn’t any horror at all. But since we’re talking about an internet slot and not some indie scary movie, that’s actually a positive thing. So, settle into a comfortable position, turn on all the lights if necessary, and get ready to check into the hotel.

A highly volatile mathematical model that generates a return to player value of 96.17% or 96.5% when purchasing the bonus round adds to the nighttime knocks and bumps. Players can choose a base stake between 10p and £/€50 each spin for both game modes, and they can host the game on their laptop, tablet, or mobile device. When at least five identical symbols are placed next to each other in a horizontal or vertical direction on the 6 reels that make up the active area, a win is generated.

The Mystery symbol function is available at all times during play. When a winning cluster appears, all of the involved symbols—including wilds—are changed into mystery symbols, and a respin is given. All losing symbols are eliminated from the board prior to the respin, and the mystery symbols are transferred to the bottom spots on the grid. The mystery symbols all change into the same pay symbol type as soon as the new symbols appear on the board. The feature repeats once more if the win is enhanced or a new cluster win happens.

Let’s go wild and crazy and introduce a twist right away as horror films are known for having one at the very end. The significant revelation is that Santa’s Stack, a game being released by Relax Gaming in 2021, served as Horror Hotel’s inspiration. As a result, the two games have a lot in similarities. They do not share the same set and setting, though. Horror Hotel takes place in a graveyard at night, with a bright full moon, gnarled trees, and is overshadowed by a castle/hotel on a hill, as opposed to a pleasant wintery Christmas scene. It has a similar appearance and feel as Fat Drac. Although there are several skulls and a mysterious music, the overall feeling is one of amusement rather than fear. When you win free spins, the action transfers to the hotel lobby, where those anticipating a restless night might be able to find a room.

With the addition of its own twists and the cunning recycling of various earlier Relax Gaming concepts, Horror Hotel skillfully creates a distinctive experience. The result should excite fans of the studio’s work because it’s another excellent Relax Gaming slot with all the components for a spooky enjoyable experience.