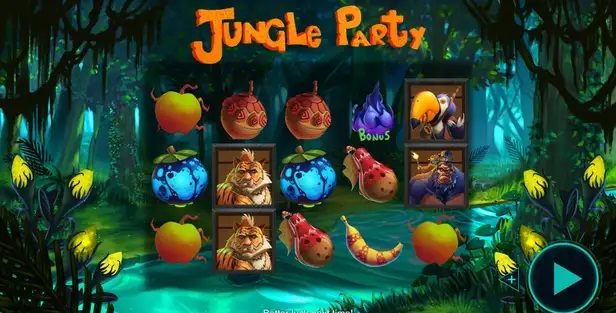 Jungle Party is able to accurately depict the actions of its primary protagonists. A jungle group is bound to include a variety of wild creatures, as we see in this new slot from Nemesis GS. It will include various features to make it even more engaging for casual gamers, thanks to its beautiful aesthetics and low volatility.

Each game will have 5×3 reels, offering the player a total of 25 lines to wager on. The slot will pay up to 117.6x the bet ($2,940 cash) if the perfect combinations form, which may not seem like much, but it’s coming from a low-medium volatility game with a 96.26 percent RTP. Overall, it’s a fair game with a variety of significant features like as the Wild Box, Snake scatter and its free spins, and the Dragon Seed Bonus, which leads to a bonus game.

If you play with all lines active, each round will cost you at least $0.25. Increase the coin value to $1 even, and you’ll be able to wager up to $25.

Features of the Jungle Party Slot

The substitute emblem is going to be a plain box with the Wild logo on it. It takes the place of ordinary symbols and aids in the formation of winning combos. It can’t be used to activate additional features.

By landing 3 to 5 times on the reels, a Snake will award you with 5 to 20 free spins. It can appear in a variety of locations; it does not  matter where it appears as long as it appears on three or more reels.

The Dragon Seed Bonus icon is required for the bonus game. It’s another scatter, and you’ll need 5 of these to activate the feature. It entails clicking on leaves to reveal hidden goodies beneath them.

We have been whisked away to the middle of the forest, where the party is about to begin. The design is fantastic; I really enjoy Nemesis’ designs in general, and there are only themed icons on the reels here. Apple, Banana, Acorn, Avocado, Blueberry, Bear, Tiger, Tucano, and Monkeys would be the first. It has a Box (wild), a Snake (scatter), and a Dragon Seed (bonus).

Jungle Party adds a couple of decent features to an otherwise low-volatility, low-potential experience. It is fine if you just want to relax; it won’t steal you blind right away, but do not expect to become wealthy with it.