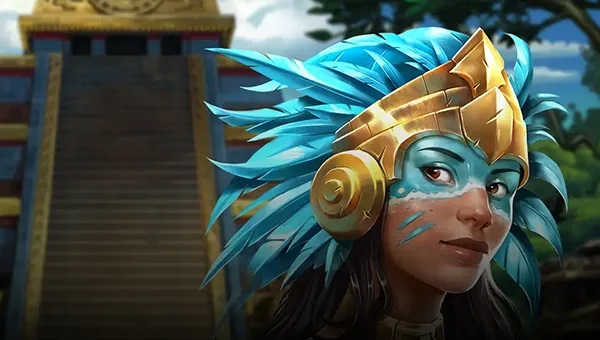 The Inca Empire, also known as Tawantinsuyu, was a pre-Columbian American civilization that peaked in the early 16th century and was the largest empire in the region. The Inca are known for their iconic stone structures, such as Machu Pichu, and have inspired developers like Play’n GO to create games like Legacy of Inca, which celebrates the legacy of the Inca through features like free spins with added wilds and Temple Spins. Although the Inca Empire may not be as well-known as the Aztecs, it is no less fascinating and mysterious.

The scene in Legacy of Inca, developed by Play’n GO, features a lush jungle or forest with thick vegetation and intricately carved stone structures. It is unclear whether this represents a civilization on the rise or has been abandoned and reclaimed by nature. Regardless, the visuals are of high quality and reflect the professional standards for which Play’n GO is known.

Legacy of Inca has a return-to-player (RTP) percentage that ranges from 96.29%, depending on the market in which it is played. Its volatility has been rated as medium, with a score of 6 out of 10, indicating that it may be slightly less volatile than other games in the same genre by Play’n GO. The game is played on a 5-reel, 3-row matrix, and players can choose to wager anywhere from 10 p/c to £/€100 per round. It is important to refer to the game’s help file to verify the specific RTP configuration for your market.

In Legacy of Inca, players can win by landing combinations of three, four, or five matching symbols on the game’s 20 paylines. The low-paying symbols (J, Q, K, and A) payout five times the stake for a five-symbol win, while the mid-level symbols (toucan, snake, and jaguars) are worth 10-12 times the bet for a five-symbol success. The highest payouts come from the three character symbols, which pay out 15 to 100 times the stake for a full line of them. Wild symbols, which can substitute for all other pay symbols and appear on all five reels, also offer high payouts, with a potential value of up to 750 times the bet for a five-symbol win.

Unlike its sister slot, Legacy of Dead, Legacy of Inca is a relatively simple game with few additional features. The only other symbol to be aware of is the scatter.

Free spins get activated once three or more scatter symbols land anywhere on the game’s grid. A spinning wheel determines the number of free spins awarded, ranging from 3 to 10, 15, or 20. At the beginning of each free spin, between 1 and 9 wild symbols are added to the second, third, and fourth reels. It is also possible for wilds to land on reels 1 and 5 during regular spins. It’s worth noting that 2, 3, 4, or 5 scatter symbols on the screen also pay out 1x, 5x, 20x, or 100x the bet, respectively.

Upon review, Legacy of Inca appears to be a solid addition to Play’n GO’s collection of Legacy/Dead/Book-themed online slots. The game features visually stunning graphics that capture the essence of the Inca Empire, or at least Play’n GO’s interpretation of it. It is also easy to play with and visually appealing. While it is difficult to gauge the historical accuracy of the game, Legacy of Inca brings the Incan Empire to life. It demonstrates its enduring appeal alongside other ancient civilizations frequently featured in online gaming.

Initially, it was thought that Legacy of Inca might be similar to Legacy of Dead, but the two games have distinct differences in terms of gameplay. Legacy of Inca does not follow the “book of” template and instead features a round of added wilds in free spins and a second layer of Temple Spins. While this formula may feel familiar, it is worth noting that Play’n GO used the concept of embedded free spins in a previous game that is not currently remembered. The features in Legacy of Inca are solid, and the game offers a maximum potential win of 6,500 times the bet, which is higher than many other “book of” slots.

Upon further reflection, the bonus round in Legacy of Inca seems somewhat similar to the free spins within the free spins feature in Cat Wilde and the Lost Chapters. While not the same, Legacy of Inca is well-constructed, visually stunning, and features simple, straightforward gameplay. It may not be a “wow” moment, but it is a solid and enjoyable game.