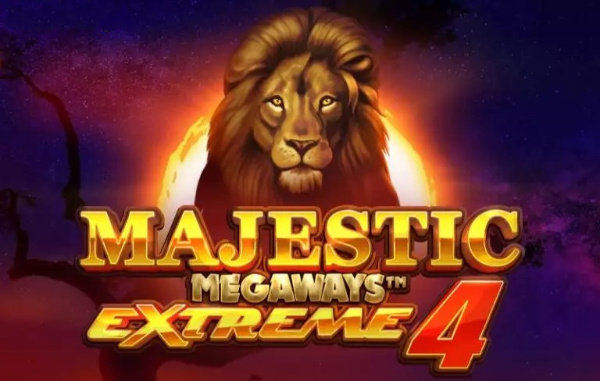 The first Megaways game in the series was released two years ago, and iSoftBet is gearing up to develop an even more intense edition. Majestic Megaways Extreme 4 will include four sets of six reels on the screen, providing four times the number of ways to win, but the top payouts and graphics will remain the same as the original slot.

Each of the four sets of six reels in Majestic Megaways Extreme 4 has up to 117,649 ways to win (up to 470,596 ways total from all of them). It appears to be a normal slot machine in this category, with prizes as high as 20,000x the bet and a 96 percent RTP. Its more notable features include mystery symbols and free spins with multipliers, in addition to cascading reels and stacked symbols.

It starts at $0.50, which is enough to spin all four sets of reels. Larger wagers are also possible, with the maximum bet amounting to $50.

In Majestic Megaways Extreme 4, a nice payoff appears to be on par with those available in the ordinary edition of this slot machine. It will pay up to 20,000x the stake, and that’s just the upper limit; it appears to be capable of far more.

Although the average returns may not apply to every single player, they do offer us a solid notion of how fair this real money slot is during its whole lifespan. It fares fine at 96 percent, but the original did even better.

The most remarkable feature of this slot machine is that it displays four sets of six reels, rather than simply the one most people are used with. For all sets, there will be an additional horizontal reel at the top of the middle four columns.

Cascades occur once you’ve created a winning combination. These are used to take out winning symbols and replace them with new ones in the hopes of producing more combinations and triggering more cascades.

In Majestic Megaways Extreme 4, there will be a wild symbol, however it will only appear on the horizontal reel from the top.

Mystery symbols appear in the form of the Moon and can appear on the reels numerous times before being changed into a single sort of normal symbol.

Max Megaways is a random mechanic in this game that works as advertised. It just provides you the most possible winning combinations on that particular set of reels.

Majestic Megaways Extreme 4’s major feature is free spins, however you must first obtain at least four scatter symbols on the same payline. At this moment, an extra feature will determine whether you will receive the ordinary or enhanced free spins.

Free spins with an increasing multiplier are available in the normal edition, which increases by 1x whenever a winning combination appears.

You’ll have the opportunity to unlock the additional sets of reels along the route in the superior version. You can activate the 2nd, 3rd, and 4th sets, as well as an additional 5 free games, by collecting the first 5, then 10, and finally 30 Diamonds.

In terms of the feature, you’ll come across a slot machine with images inspired by African animals. We discover that the symbols utilized in the savanna behind the reels are similar to those we’ve seen in many other games. The six Royals are the ones that kick things off, with 9 to A logos popping up all over the place. Lions, rhinos, elephants, and buffalo are among the top emblems. Extra features include a Diamond Bonus, Moon Mystery, and the African Tree Wild.

Majestic Megaways Extreme 4 appears to be intriguing, especially because it let you can play on numerous sets of reels at once. Aside from that, it’s a very conventional Megaways-style game with elements that can be found elsewhere.