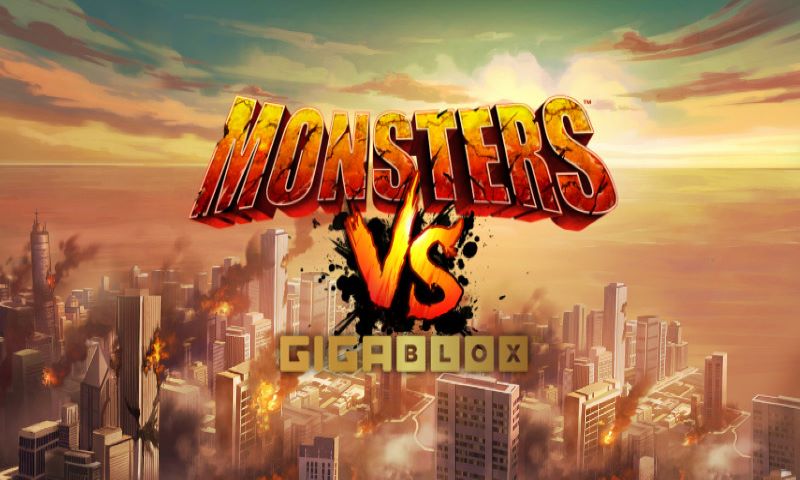 If we are to believe the narrative presented in Monsters vs. Gigablox, the future appears to be grim. This Yggdrasil and Hot Rise Games slot machine isn’t very upbeat with creatures the size of skyscrapers that resemble apes and entire towns on fire.

There are 50 paylines on the 6 reels of the Monsters vs. Gigablox slot machine. Up to $249,280 in cash might be won in the maximum prize, which is 3,116 times the bet. The RTP of the game, which is extremely erratic, is 95.50 percent. I should mention the Gigablox engine, free spins, and wilds as a few other bonuses.

Given that you have 50 lines, the slot machine demands a minimum bet of $0.50 every spin. The maximum increase in the wager is $80.

While a top prize of $249,280 may sound fantastic, it only represents a value of around 3,116 times the wager made during the round. Given the expected high volatility and the low RTP of 95.50 percent, I believe there is space for growth in every aspect.

Features of the Monsters vs. Gigablox slot

Gigablox is a crucial component of this slot machine but isn’t exclusive to Monsters vs. Gigablox; it may be found in a few other games as well. It entails the introduction of larger symbols on the reels, which appear in positions ranging from 2×2 to 6×6 and count as 4 to 36 of the same kind. When this occurs, being paid well becomes considerably simpler. Regular and feature symbols can both show up in this form.

Wild symbols will be employed to create more combinations, whether in ordinary or Gigablox form. If they are on the same line as conventional symbols, it will act as a stand-in for those symbols.

A minimum of five scatters must be visible, or a larger Gigablox scatter, to start between nine and forty free games. When one of the premium Monsters transforms into a wild and applies a 2x multiplier to the wins it contributes to, it will rule the feature. Gigablox mechanics have also been improved; symbols now average larger sizes and only transform into premium symbols.

It contains a lot of science fiction, but it also has a post-apocalyptic feel to it. Given that the concept is comparable to that of Godzilla or King Kong, chances are it will bring to mind those films (huge monsters against human-made cities).

The Monsters vs. Gigablox slot machine has a fantastic design and offers a superb blend of bonus features and gameplay. It would have been much better if it had also provided greater returns. This slot may be a nice choice overall for a player seeking a retro-style aesthetic and low volatility, but there are many other possibilities of that kind that provide higher RTP percentages. Overall, I enjoy the slot machine; it is a genuine Yggdrasil product, has nice graphics, and has some interesting bonus features.